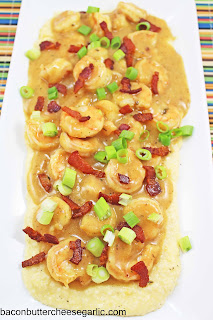 If you were around in the late ’70s, early ’80s, you will remember a TV show called “Alice.”  The show was centered around a widowed woman who worked at Mel’s Diner as a waitress.  There was another waitress there who was from Fort Worth named Flo.  She had really big hair and always told people to “kiss my grits.”  I loved that show.  I think I’ll watch it on YouTube now.  Oh, wait, I’m supposed to be giving you a recipe here.  YouTube can wait.

One of my favorite breakfast foods is grits.  I am a Texas girl, and grits are a staple around these parts.  But they aren’t just for breakfast.  Shrimp and grits were a staple breakfast for fishermen in the Southern states. They cooked the shrimp in bacon grease and served them with grits.  I love the combination of shrimp and grits.  Creamy, cheesy, buttery grits covered with spicy shrimp and gravy.  And, of course, bacon.  If you’ve never had grits, it’s kind of similar to cream of rice in texture.  It’s coarse ground cornmeal that you cook on the stovetop.  And they’re darn tasty!

NOTES:  The Cajun seasoning, bacon, chicken stock, and cheese will all add salt to this dish.  I would suggest making your own Cajun seasoning (Emeril has a really easy one) and use less salt than is called for.  I wouldn’t add any more salt to any part of the dish without tasting it first.  If you aren’t a fan of salt or want to reduce it, use water in place of the chicken stock in the grits.

To make the grits, bring the chicken stock to a boil.  Add in the grits and butter and bring back to a boil.  Reduce the heat to low and cover.  Cook for an additional five minutes or until the grits are creamy and thick.  Remove from the heat and stir in the cream and cheese.

For the shrimp, cook the bacon and then drain and crumble. Only save about 2 T of the bacon grease in the skillet.  In the same skillet with the bacon grease, melt in the butter and then add the shrimp.  Cook for just a couple of minutes until the shrimp is fully pink and done.  Remove from the skillet and cover to keep warm.  Whisk the flour into the same skillet.  Whisk in the chicken stock, garlic, and Cajun seasoning.  Continue cooking and whisking until thickened and bubbly.  Remove from the heat and add the shrimp back in.  Serve the shrimp and gravy over the grits with the bacon and green onions. Sumber http://baconbuttercheesegarlic.blogspot.com 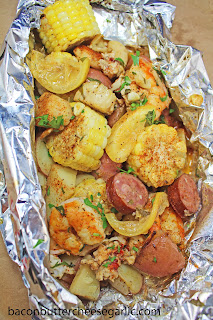